The show went entirely virtual for the first time ever due to concerns over the coronavirus, which has shut down major film, TV and music productions and forced award shows to reassess how and when they’ll air. Amid a night of impressive pre-taped performances, DaBaby and Roddy Ricch debuted a rendition of “Rockstar” that sparked both praise and backlash from viewers.

The music video opens with DaBaby laying flat on the ground with what appears to be a white police officer kneeling on his neck. The image was an obvious reference to Floyd, who died in police custody on May 25 in Minneapolis. A video of the incident sparked nationwide protests against police brutality, specifically within the black community, after it showed officer Derek Chauvin kneeling on Floyd’s neck for more than eight minutes as Floyd shouts “I cannot breathe” and “don’t kill me” before losing consciousness. He was later pronounced dead.

CELEBRITIES WHO HAVE BEEN ‘CANCELED’ OVER SCANDALS, STANCES ON PROTESTS

The remainder of DaBaby’s video shows the artist performing atop a burning police car surrounded by masked protesters wearing shirts that read “Black Lives Matter,” “I Am George Floyd” and more. Other parts of the video show police in riot gear clashing with protesters as DaBaby and Ricch perform amidst the chaos.

The powerful images culminate with a young girl walking to the camera while holding up a sign that reads “More Love.” As she walks, audio from a viral 2016 speech made by then-9-year-old Zianna Oliphant at a Charlotte City Council meeting about police brutality begins to play.

“We are Black people, and we shouldn’t have to feel like this,” Oliphant’s says in the video. “We shouldn’t have to protest because y’all are treating us wrong. We do this because we need to. It’s a shame our fathers and mothers are killed and we can’t even see them anymore.”

Many were quick to praise the performance for its powerful, albeit controversial imagery.

“dababy really did something here,” one user wrote.

“DaBaby is killin this performance of Rockstar. The imagery of a cop on his neck like George Floyd’s murderers broke my heart,” another user wrote.

“Dababy absolutely killed that. Who ever says otherwise, go get drug tested,” a third user tweeted.

“DaBaby with the visuals *snaps and claps* he ain’t come to play,” another user wrote.

However, others made sure to note that DaBaby previously caught backlash for his response to criticism that he remained silent in the wake of Floyd’s death, while other artists were making bold public statements against police brutality and systemic racism.

“I always sit back and let the hype blow over before I give my insight so my perspective don’t get confused with all the ppl who only speak for likes & comments, or to save face,  or maybe because their PR department, label, or management told em they should make a statement….” DaBaby tweeted at the time. 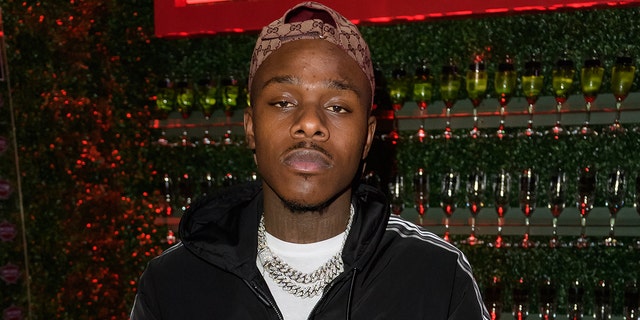 DaBaby, caught backlash on social media for his performance at the BET Awards.
(Jason Koerner/Getty Images)

CELEBRITIES WHO HAVE JOINED GEORGE FLOYD PROTESTS AGAINST POLICE BRUTALITY

Many took to Twitter to accuse the rapper of capitalizing on the tragedy.

“Didn’t DaBaby tweet that he had nothing say regarding the protests?” one detractor wrote.

“DaBaby been quiet this whole time, didn’t say a peep about BLM and then had the audacity to reenact George Floyd’s death on live TV,” another user wrote.

“I know DaBaby don’t have any common sense but I wanna know who at BET thought it was cool to allow a “re-enactment” of George Floyd’s death,” wrote a third user.

“i cant believe dababy said let me reenact george floyd’s death after tweeting that he didn’t have anything to say about the whole thing and that he was waiting until the “hype” died down,” a fourth user echoed.